To open its Global Leadership Meeting, the communicators at Sanofi Genzyme thought they’d set a different tone by doing something daring, unconventional and downright fun. The results have earned them first place in the “Humorous Video” category of Ragan’s 2017 Employee Communications Awards.

Some members of the team were fans of late-night talk show host James Corden, so the idea of getting top executives to engage a little Carpool Karaoke bubbled to the top of the list. Seven of the 11 members of the Executive Leadership Team (ELT) participated (the others weren’t available due to travel schedules). Additionally, six were featured in an extended scenes reel filmed at the site of a meeting they were attending, with their contributions shot in taxicabs and even the driver’s side of a parked bus.

The main video featured the seven executives carpooling and discussing the organization’s strategic priorities, and then finding a song that symbolized their feelings about those priorities. “Assembling the cast for the morning of filming was no easy feat,” the communicators say. “One ELT member changed a flight to arrive back in Boston earlier than anticipated so he could participate in the video.”

The results could be heard in the robust laughter that erupted throughout the screening and the extended applause the followed it. Conversation during the meeting kept returning to the video, another sure sign of its success.

Congratulations to the communications team at Sanofi Genzyme. 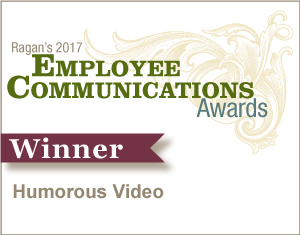