BC Pension Corporation, which has administered pension plans in British Columbia since 2000, recently introduced a newly redesigned corporate brand. The organization’s communicators developed a two-minute video to convey the brand’s message and explain what the organization and its 500 employees mean to residents of British Columbia. The video is so effective it’s won first place in the “Informational Video” category of Ragan’s 2017 Employee Communications Awards.

A compelling narration drives the video, spoken by poet and BC city counsellor Jeremy Loveday, a member of the pension plans the organization serves. In drafting the poem, Loveday drew on his mother’s experiences with the staff following the death of her husband, giving it a deeply personal flavor.

The organization’s staff members play roles in the video, which references the province’s vast geography.

The video was first presented at Excellence Canada’s awards gala, where it was met with overwhelmingly positive reviews. It was also presented at an organization-wide “Staff Day” event, then published on the intranet. It has since been shown at other events, where it always is greeted with accolades. The video is also available on YouTube. Watch it to see an outstanding example of how to bring words, music, and images (featuring your own staff) together to create an emotionally gripping story. 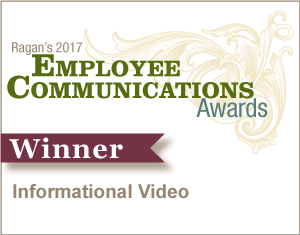