The magazine of Northrop Grumman’s Aerospace Systems sector was called “Inside Aerospace” for some time. Late in 2016, an internal team took on a project to revamp the publication ― inside and out ― to better reflect what Northrop Grumman is today: a technology company that operates in the air, space, and aerospace industries, developing bleeding-edge technologies and working on projects like NASA’s James Webb Space Telescope. The publication that resulted has earned first place in the “Most Improved Design Award” category of Ragan’s 2017 Employee Communications Awards.

The company that introduced the world to many revolutionary products and technologies has undergone an evolution over the years. And so the new name of the publication, (r)evolution, was born. Pronounced “Our Evolution,” the title speaks directly to the company’s metamorphosis while giving a visual nod to the revolutionary nature of its work.

The team set out to reinvigorate readership, increase engagement with content, and show off the talent of the company’s internal communications team ― all while making the publication more reflective of and relatable to current employees and their work. A comprehensive content strategy tied the publication’s articles to the organization’s business priorities and annual milestones.

The number of lengthy feature stories was reduced in favor of content packaged in easily consumable segments like “By the Numbers,” “In Photos,” “NG Next” (focusing on futuristic products emerging from basic research), and “The Maker Space” (devoted to the organization’s Fabrication Laboratories, or FabLabs, and the employee maker community).

Along with the refined focus and robust editorial calendar, the process of writing and designing the content received more definition. Coupling this editorial rigor with eye-catching content has helped to increase readership and engagement from time-challenged employees. 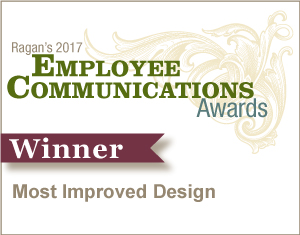