Among those represented by the United Auto Workers union are 56,000 hourly Ford employees and some 75,000 retirees across the U.S. Like many unions, the UAW handles benefits and health-related communication with its members; Ford (typical of this arrangement) maintains a hands-off approach to this kind of communication. However, the enormity of the opioid crisis led the UAW to approach the Ford communications team to help amplify the campaigns the union had undertaken with its Campaign of Hope. The articles which resulted have won first place in the “Article Series” category of Ragan’s 2018 Employee Communications Awards.

While company-union collaborations are rare, Ford enthusiastically welcomed the invitation to tell stories that would trigger emotional reactions. The team worked quickly to identify stories from Ford’s U.S. manufacturing facilities, settling on three employees, each with a unique story to tell.

Austin Wade and Duane Pliska battled addiction at various stages of their lives, while Mark Hart lost his 24-year-old son to an overdose. Each came from different backgrounds and generations, helping convey the idea that anyone can be affected by opioid addiction.

The series was repurposed on Ford’s intranet, in the printed @Ford Manufacturing magazine, the retiree e-newsletter and the employee mobile app. Each article attracted more than 7,500 views. A number of employees used commenting functionality to show support for their colleagues, and some shared their own experiences. Several expressed their pride in working “for a company that is willing to send those who suffer from this to rehab without judgment or the fear of losing a job,” as one employee put it.

Congratulations to the cross-functional team of Mark Truby, Karen Hampton, Brad Carroll, Jenn Corney, Alice Riley and Chris Kassab (from Ford) and Jerry Carson and Raenell Glenn (from the UAW) for their work. 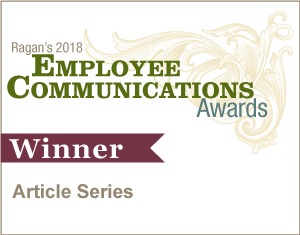