Darryl White had earned the trust and respect of people he worked with at BMO, one of North American’s largest financial institutions. But for those who hadn’t worked directly with him, he was a big unknown when it was announced he would assume the role of CEO. Handling that announcement has earned BMO and Livewire Communications—contracted to work with BMO—first place in the “Executive Communications” category of Ragan’s 2018 Employee Communications Awards.

The goals embraced for communication about the transition were unsurprising: Make it go smoothly, with employees expressing high levels of confidence in BMO leadership, the bank’s future and management’s effectiveness.

Company communicators and the Livewire Communications team reviewed White’s previous communications to get a sense of his style before developing a strategy. The team also immersed itself in changes White would make, such as his desire to shift the culture to one that is more market-driven and innovation-focused.

The strategy called for greater visibility for the new CEO while positioning him as a leader who understands the bank and represents a generational shift. After an initial phase focused on familiarizing employees with White, the team moved on to the first 100 days and a campaign-style stream of communication to reinforce key messages. Beyond the first 100 days, the team sustained those key messages while adapting its use of various channels to accommodate White’s preferred communication standards.

A survey found 87 percent of employees have confidence in the future of the bank and 81 percent in its leaders, just one data point among many. 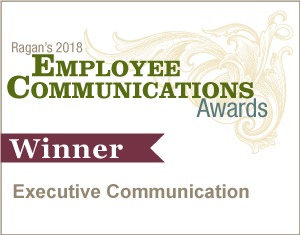