The 48 episodes of American Airlines’ “Tell Me Why” vodcast have earned more views than 98 percent of other internal communications content. It may be no surprise, with that kind of uptake, that the series has become an important channel for reaching employees with information about the rationale underlying business decisions. It’s also little surprise that it’s won first place in the “Podcast” category of Ragan’s 2018 Employee Communications Awards.

It definitely was a surprise to the communications team that the production became so popular. Aimed at all 130,000 employees, many of whom are deskless workers accustomed to the short bursts of content from Instagram and social media newsfeeds, “Tell Me Why” was conceived to be short, consumable, relevant, authentic and timely.

One intriguing approach taken to fulfill these objectives was a one-take policy, ensuring authenticity. Another interesting decision was to make the audio from the sessions available to external audiences in the form of audio-only podcasts, which have attracted more than 70,000 combined plays. (The videos have been viewed nearly half a million times internally.)

Among the decisions discussed in the series is the choice of color for new uniforms and how the company compensates customers when their service expectations aren’t met. Early episodes continue to attract views, a testament to the value of the series.

Congratulations to producers Ron DeFeo and Adib Abrahim, along with various sound engineers, videographers, leaders (who serve as guests) and communication staff members. 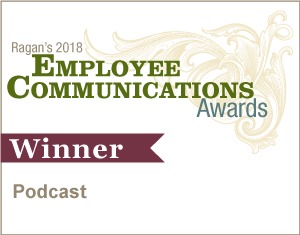