Hitachi Vantara was formed when three Hitachi subsidiaries merged. The company accelerated the pace of transformation in 2017, seeking to fully integrate the three organizations and create a single operating model and business strategy. The communications team undertook Project North Star to establish a shared sense of identity that would drive engagement levels higher. Its success has earned first place in the “Rebranding Campaign” category of Ragan’s 2018 Employee Communications Awards.

The change was big enough that some employees left the organization, and morale fell among those who remained. Working with an external agency, the five-person team assessed the legacy cultures of the three subsidiaries, then used that information in developing a strategy of storytelling that featured the voices and faces of Hitachi Vantara employees.

In fact, employees played a vital role in the strategy, with a global grassroots network providing insights—including a new employee value proposition and a set of expected behaviors. The agency hosted design-thinking workshops that brought together employee influencers and key executives. The team relied on other employee inputs as well, undertaking a series of employee photo and video shoots around the world from which it created a 29-page e-book that declares employees are “going to change the way the world works.”

Storytelling drove articles and videos, with employees sharing success stories illustrating the new culture and discussing the company. A survey found 93 percent of employees indicated they were proud to work for the company—up 6 points from the previous year—and the voluntary attrition rate dropped by 52 percent. Meanwhile, Glassdoor reviews reflected improvements in employee views of the company. 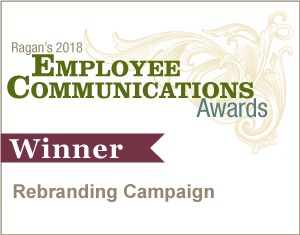