In many organizations, employees subscribe to a health care plan and use it only when they have to, for illness and injury. They don’t take advantage of a variety of plan components that are designed to prevent illness or injury and help them live a long, healthy life. Morley—whose business is business process outsourcing, meetings and incentives, and exhibits and displays—wanted employees to be proactive about their health, which would pay dividends to the company in a variety of ways (including driving down costs). The campaign it developed has won first place in the “Wellness Program” category of Ragan’s 2018 Employee Communications Awards.

The campaign would increase awareness of Morley’s benefits, encourage employees to take advantage of free annual checkups and wellness time off, and spur use of features like the company’s telemedicine program. It was centered around a visual theme presented by a designer that emulated handwriting, a theme the team incorporated into all media, including videos, posters, digital displays, environmental graphics, mirror clings and more.

The months-long campaign featured seasonal programs, such as the company’s wellness program sponsoring the MoOlympics during the winter, challenging people to take five-minute exercise breaks with exercises that corresponded to Winter Olympic sports. During the summer, the company promoted a challenge to walk between the company’s Michigan headquarters and one of its South Carolina locations.

Photos and videos helped promote the campaign, which led more than 25 percent of associates to get physicals during the first six months. Employees have also saved some $10,000 by qualifying for discounts to receive annual physicals and meet requirements for glucose, cholesterol, BMI and smoking cessation. Telemedicine use spiked to 73 percent. 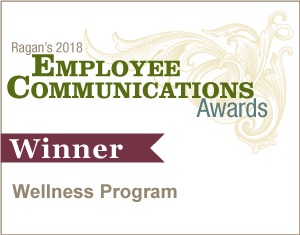