The American Heart Association tackled an issue that’s literally a matter of life or death in its “Heart Attack vs. Cardiac Arrest” infographic. In addition to saving lives, the effort also won the AHA an award in the Best Infographic category of Ragan’s 2013 Health Care PR and Marketing Awards

Do you know the difference between a heart attack and cardiac arrest? Although the terms are used almost interchangeably by many people, they’re different conditions with distinct symptoms, and they require specific treatments if lives are going to be saved. AHA’s goal was to increase awareness of these differences, as well as to deliver compelling and relevant content designed to enhance its social media presence and support AHA’s CPR & First Aid division as a valuable resource.

The resulting graphic clearly spells out the distinction between the two types of events: A cardiac arrest is an electrical malfunction in the heart; a heart attack occurs when blood flow to the heart gets blocked. Both can be deadly, but fast action in either case can prevent a tragic ending.

AHA’s infographic, the first in the series, was developed in-house by its internal design team and posted to the association’s CPR & First Aid Facebook and Twitter accounts. It was also posted to AHA’s national Facebook, Twitter, and Pinterest accounts and its own website for easy linking and distribution to field communications and sales teams (about 200 people).

Released in early March 2013, the infographic gathered more than 600,000 Facebook impressions within a few days, and had more than 5,000 shares. Within the month of March, AHA saw a 30 percent increase in likes on its CPR & First Aid Facebook page. AHA has received requests from field staff to create a printed version to share with customers, and has been asked to translate the piece into several languages for international use.

AHA’s Grant Schirpik, along with the association’s Communications Department, deserve credit for an effort that will inform people and potentially save thousands of lives.

For a look at the award-winning piece, click here. 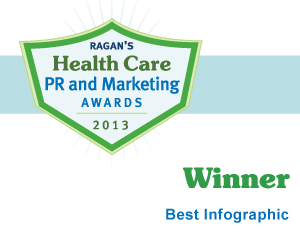