Connecting with clients is important in any industry.

When that connection has to do with one’s health, the importance is amplified.

No wonder Doner Advertising chose to make that the focus of a new effort for OhioHealth, the largest health system in central Ohio with eight hospitals, 42 care sites, and more than 22,000 physicians, associates, and volunteers.

Prior to 2011, OhioHealth marketed its services by individual hospitals and clinical programs. In January 2013, however, Doner launched the company’s “Believe in WE” campaign, which focused on what it refers to as the four “pillars of connectivity”:

Through research conducted using six focus groups—including both OhioHealth and competitor loyalists—Doner learned “connectivity” was something that the health system could realistically claim in its market. Further, it was an idea that registered with the campaign’s target audience of health care consumers—specifically, the “Chief Wellness Officer” of the household who makes most of a family and/or home’s health care decisions.

Consisting first of print and radio, with television and digital both introduced by April, each of the pillars addressed core messages of OhioHealth. These included brand, heart and vascular, stroke, spine, cancer, and orthopedics.

Proving on target, OhioHealth.com averaged 6,247 visits per day, with the average mobile and tablet traffic up 60.4 percent compared to the same date range in 2012.

We, too, connected with Doner’s work for OhioHealth, and are proud to announce it as our selection for Best TV Advertising Campaign in Ragan’s 2013 Health Care PR and Marketing Awards. 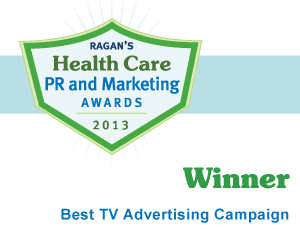