The upgrade of the QuintilesIMS intranet iQ was driven by technical requirements: the transition to Office 365 and SharePoint 365, which moved the intranet into the cloud. QuintilesIMS took advantage of the migration to bolster the intranet’s internal social media offerings—and along the way, won first prize for “Best Blog” in Ragan’s 2016 Intranet Awards.

When the internal social network, which had been the built-in SharePoint module, was swapped for Yammer, employee blogs were also activated. They were independent of official corporate communication despite the fact that they get about the same level of visibility on the intranet home page.

The posts from frontline workers produced interaction with other employees. Posts have been liked, commented on, and shared. What’s more, individual posts were viewed a total of nearly 71,000 times with an average of 683 views per post. Some 18,000 people viewed the most popular post.

Most impressive, though, is the number of employees who have opted into internal blogging: More than 100 posts were published by employees in the first week of the launch. One employee blogger said that blogging on iQ is “instant visibility.” The workforce trusts blog content, she wrote.

The nine-member global and cross-functional team behind the iQ relaunch is to be congratulated for introducing a truly effective blogging platform for employees. 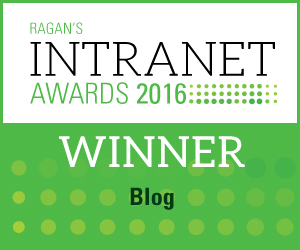