Among the goals for QuintilesIMS’s reboot of its intranet, iQ, were a mobile-first design and greater real-time collaboration. QuintilesIMS’s success in meeting those goals has won the organization first place in the “Social Network” category of Ragan’s 2016 Intranet Awards

Getting employees to use the new system involved finding one that was more user-friendly, so the organization dropped the built-in SharePoint network in favor of Yammer (a Microsoft-owned tool). The intranet team used Yammer themselves as the collaboration tool during the development of the revamped site.

Eschewing an “If we build it they will come” mentality, QuintilesIMS produced a variety of resources to help employees figure out how to use the social network, including videos, quick reference cards and user manuals. Yammer activity appears on the home page, keeping collaboration front and center for employees.

So do employee blogs, which combine with the internal social network to create a genuine social and collaborative experience for employees. Making the intranet mobile-friendly helps drive collaboration because employees are able to engage spontaneously rather than waiting to return to their desks.

Within 36 hours of iQ’s launch, 16,000 employees had activated Yammer; that rose to 34,000 over the first three months of availability. Those users created 450 active groups. In a single month, employees shared nearly 870 posts, each of which (on average) earns nearly seven interactions. 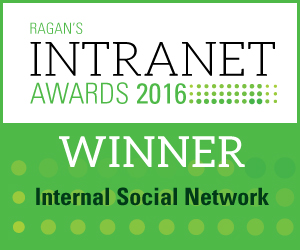