Maple Leaf Foods’ introduction of a new intranet—myMLF —could have been a disaster. Instead it’s a success—and has won first place in the “Design” category of Ragan’s 2017 Intranet Awards

A lot of organizations have created intranets using SharePoint and Office 365, deploying them without the investment in customization that Maple Leaf Foods opted to make. There are easier platforms to customize than SharePoint, but playing the hand it was dealt, the intranet team researched best practices while also factoring in what worked on external-facing websites.

Since the new intranet launched, employees have spent 10 times more time on the site than they did on the earlier iteration, even though it was the default homepage that appeared when employees opened their browser. Yammer readership has also exploded, from an average of 600 reads per post to 1,600.

Other signs point to higher engagement, such as a 400 percent increase in “likes” to content. In addition to these notes, the site simply looks great. 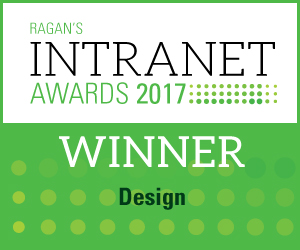