The largest auto importer in Turkey, Dogus Otomotiv, had an intranet. Most employees, though, had moved into the mobile era. Add to that a large deskless population, and the wisdom of introducing a mobile solution was clear. Dogus Otomotiv’s success in launching a mobile intranet app has earned it first place in the “Mobile Integration” category of Ragan’s 2017 Intranet Awards.

Most organizations would simply introduce responsive design and call it a day. Dogus Otomotiv’s team opted to create an entirely new employee communication app using a thorough plan that included testing for bugs and security.

The broad range of content and services offered by the app (available in iOS and Android versions) is breathtaking. News, baked-in instant messaging, a comprehensive employee directory, cafeteria menus, reports, calendars, career opportunities and a suggestion system are just some of the features available through the app.

Only two months after making the app available, 500 of the organization’s 800 employees had downloaded it, 400 of whom have been deemed active users. Employee feedback is already informing future plans, which include group messaging, meeting room reservations, event RSVPs and a polling system.

The approach the Dogus Otomotiv team took could serve as a model for going mobile with internal communications. 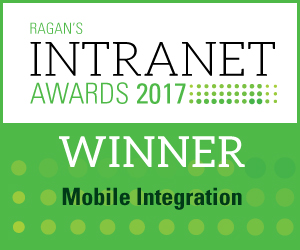