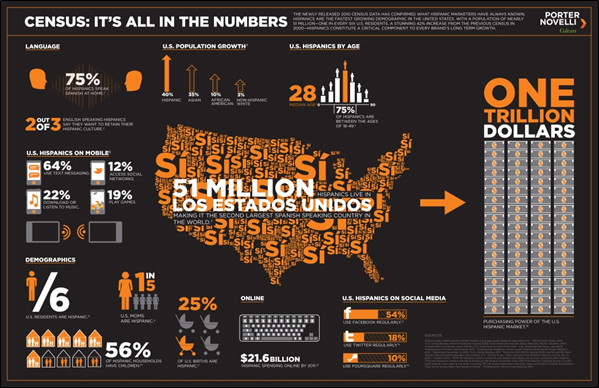 Did you know that the United States has the world’s second-largest Spanish-speaking population?

You would if you had seen Porter Novelli’s infographic, titled “Census: It’s All in the Numbers.”

The striking presentation, with its stark color scheme and plethora of statistics, has earned it top honors in the Infographic category in Ragan’s PR Daily Awards for 2012.

A few key elements make this effort a standout:

The stark, glossy black background makes the images pop (though the sans serif typeface does get lost in smaller point sizes, but that’s a quibble). The numbers themselves and the images convey a demographic and behavioral portrait of what is the fastest-growing populace in the country.

The graphic tracks information and trends about age, mobile and online use, language and culture, and spending, among other particulars.

The infographic is part of a larger report on the Census, but its striking visuals and clearly rendered information allow this effort to stand on its own merits.

Congratulations to Sonia Sroka, Daniel Pineyro, Jennifer Vasquez, and all those who collaborated on this winning effort.

For a larger version of the infographic please click here.