Giving voice to the voiceless can be difficult. When those voiceless legions are children in underdeveloped nations and their nemesis is AIDS, the task can seem downright daunting.

That is, however, what Charles Lyons succeeded in doing. Lyons, who is president and CEO of the Elizabeth Glaser Pediatric AIDS Foundation, wrote an op-ed piece for The Huffington Post that keyed on a speech by Secretary of State Clinton on the topic.

The op-ed garnered immediate attention and led to follow-up pieces on the issue. It also won the Glaser Foundation the top spot as Best Op-Ed in Ragan’s 2012 PR Daily Awards.

The op-ed trumpets medical progress—notably the use of antiretroviral drugs—but notes that said progress hasn’t gained much attention:

… new HIV cases in children dropped dramatically in the U.S. and other countries, to the point where we have virtually eliminated pediatric AIDS in the developed world.

In many respects, it’s been a relatively quiet success. Most Americans aren’t even aware that an HIV-positive woman can have an HIV-negative baby.

Lyons’ piece concludes with a prescient quote from Elizabeth Glaser herself and then, coming full circle by giving voice to the voiceless, it offers a rhetorical question that might be posed by future generations:

In the early days of the epidemic, our founder Elizabeth Glaser was vocal about the need for urgent action to stop the spread of AIDS in children—and she wouldn’t take no for an answer.

“There should be an uproar of children shouting, ‘What about me?’” she said.

… We need to make their fight our fight, and finish the job of ending pediatric AIDS and building an AIDS-free generation.

If we don’t, a new generation still grappling with the scourge of HIV/AIDS will look back at this time, and ask us:

“What were you waiting for?”

To view the winning op-ed in its entirety, please click here. 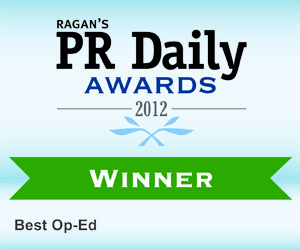