When wholesale power generation company NRG Energy (NRG) signed on Burson-Marsteller (B-M) to showcase its work for a solar installation on the Washington Redskins’ FedExField, the firm’s roster of impressive clients could only have been a good sign of the end product that was still to come.

And come, it did.

As a company used to serving more than 1.8 million residential, business, commercial and industrial customers, failure was not an option for NRG in the community. It needed to establish itself as a pioneering, consumer and B2B focused leader of alternative energy solutions.

Knowing this, B-M and project lead Mark Devito brought Proof Integrated Communications into play to help work on the Solar Bowl, a campaign that would not only announce NRG’s partnership with the Redskins organization, but do so in a creative, captivating way.

The concept: Create a video that embodies NRG’s innovative approach, showcasing the installation process in a unique and visual experience.

Beginning in August 2011 and utilizing four strategically placed cameras around the edge of the football arena—all primarily powered by solar panels themselves—the team snapped 90,000 photos over the 35-day course of NRG’s installation process.

After the project wrapped, a press conference was held on Sept. 15, 2011, to unveil the work, where more than 25 reporters from national networks and local affiliates gathered, helping secure coverage in print and online from USA Today, NPR radio and National Geographic.

Aside from its impressive media placement, the work also resulted in Proof Integrated Communications’ triumph on behalf of NRG as winner of the Best PR Video in this year’s PR Daily Awards. 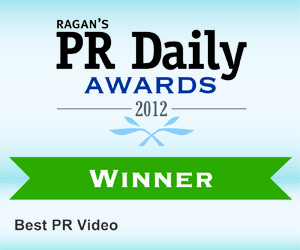