Even though decorative lenses are popular with Twilight, Lady Gaga and Avatar fans, it doesn’t mean they’re good for their health.

In fact, wearing nonprescription decorative lenses could cause blindness. To warn people about this and other dangers, the American Academy of Ophthalmology tied its latest PSA about these lenses to Halloween, a popular purchasing time for the lenses.

It didn’t just stop with making the videos. Here are a few other things it did, according to Allison Neves, who submitted the entry:

“The story was compelling and we had created strong supporting materials and executed cost-effective, wide-reaching tactics that propelled the campaign and our message,” Neves says.

The results were impressive. Visits to its EyeSmart website increased by 52 percent. Its targeted Yahoo banner ads received 1 million impressions and 800 clicks. More than 1,500 stories appeared in the media, including the Los Angeles Times, Chicago Tribune, HealthDay and the Daily Mail. There were 100 TV segments about it, in LA, Dallas and New Orleans. The radio media tour secured 41 radio interviews that aired 175 times.

Thanks to the American Academy of Ophthalmology for keeping everyone’s eyes a little bit safer, and congratulations for winning the 2012 PR Daily Award for Best Public Service Announcement. 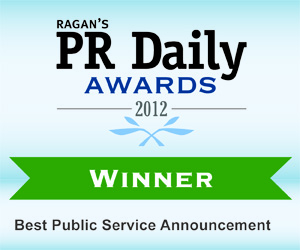