The audience listening to Louis F. Provenzano Jr.’s speech was probably a little confused at first. The CEO of Language Line Services, a language interpretation provider based in Monterey, Calif., was addressing the Texas Alliance of Patient Services 2011 Annual Conference. Provenzano was introduced in Vietnamese, and then delivered the first few minutes of his talk in Vietnamese before switching over to English. His point? “It’s difficult to advocate for patients who do not speak the same language.”

Working with Olmstead Williams Communications, a business-to-business public relations and social media agency, Provenzano delivered a concise overview of the need for accurate translation services in the health care industry, where patients needing immediate care may not be able to describe their symptoms or pain without the assistance of someone fluent in Spanish, Mandarin, Arabic or any of the other languages commonly spoken by immigrant patients in the state of Texas, where the conference was held. The speech noted that the population of non-English speakers in the U.S. has grown by 140 percent since 1980—and that in 2008 alone, approximately 1.5 million medical injuries associated with error occurred in U.S. hospitals, many of which might have been prevented by having more reliable translators available. “Patients and their families in the U.S. with limited English proficiency continue to confront language barriers that threaten their health and undermine their well-being,” Provenzano said.

PR Daily congratulates Kaitlen Murphy and everyone at Olmstead Williams Communications involved in the award-winning speech. 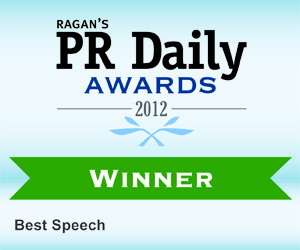