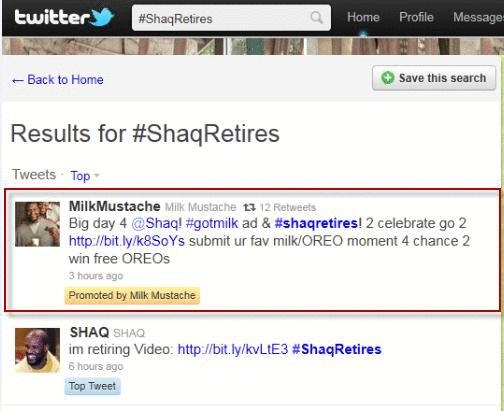 You might be familiar with the board’s popular National Milk Mustache “got milk?” campaign. In 2011, the program unveiled its Shaquille O’Neal “got milk?” celebrity ad that promoted a milk and OREO giveaway contest.

On the same day, Shaq happened to announce his retirement and the Twitter hashtag #shaqretires became a trending topic. Weber Shandwick seized the opportunity and created a promoted tweet, using the hashtag to congratulate Shaq on his retirement and drive new users to the giveaway, says Molly Lipsitz, who submitted the entry.

Here is the Best Tweet of the Year for the 2012 PR Daily Awards contest:

The main objective for the tweet was to drive traffic to the milk and OREO giveaway on Milk’s website, whymilk.com. In addition, the organization wanted to grow its fan base. First, the tweet was meant to reach fans of Shaquille O’Neal or Twitter users searching the hashtag #shaqretires. Second, the tweet was geared to connect with consumers interested in winning milk and OREOs.

We liked this tweet because it didn’t try to start a new conversation—it simply added to what was being said on Twitter.

And it was successful. This tweet helped double traffic from the week beforehand, and the program received more entries than a similar contest in 2011. In addition, the team had a 5.5 percent engagement level—much higher than the average 1 and 3 percent for other promoted tweets, Lipsitz says. 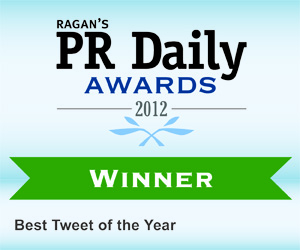