The NHL’s Minnesota Wild may not have made it to the Stanley Cup finals this year, but if the hockey franchise has anyone on the ice who’s as good as Reina Porritt is off of it, then the team is bound to get there sooner or later.

The public and media relations coordinator for Minnesota Sports and Entertainment (MSE), a family of businesses that owns the Wild, first hired Porritt in 2011 in a newly created position dedicated to the social platforms of the company’s three facilities—the Xcel Energy Center, the Saint Paul RiverCentre, and the Legendary Roy Wilkins Auditorium.

And Porritt has been off the bench ever since.

Already having completed three internships in the media relations industry—including stints with WCCO TV (CBS), the Leukemia & Lymphoma Society, and KFAN Sports Radio—Porritt understood how substantial social media was and is to the success of a company’s public relations efforts.

That being so, in her role with MSE, Porritt worked to create social media action plans that would drive engagement from both fans and customers.

After only two months, that strategy was already taking shape and had earned Porritt a feature story in the well-respected facility publication Venues Today.

As she continued to oversee day-to-day communications across a range of social media platforms while also monitoring online conversations, the analytics began to speak for Porritt’s work on their own.

At 16 months on the job, the number of Facebook likes and Twitter followers had nearly doubled for each facility.

A fan favorite called “Find the Maroon 5 Adam Levine Look-A-Like” posted clues on how people could find a look-alike to win tickets to a then-upcoming Maroon 5 performance, resulting in fans running all over Saint Paul looking for a man in tight pants carrying a guitar.

Quite frankly, Porritt figured out simply what so many of her industry colleagues often overlook. That’s to provide her company’s community of fans with the fun and engaging experience they seek.

Like the company’s fans, Porritt’s co-workers also seek something. That was to see her named the 2013 PR Daily Awards PR Rookie of the Year.

Want to get recognized? Find out about Ragan and PR Daily’s award programs here. 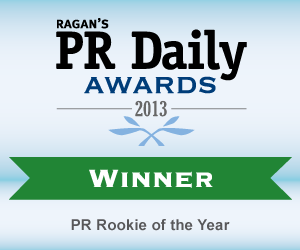