It had been several years since the nonprofit American Dental Association had issued an annual report, but in 2015 leadership instructed communicators to convey the impact of the association to members and document its major milestones. The ADA’s effort to inform all stakeholders that the content was available—and worth watching—has earned it first place in the “Annual Report” category of the 2016 PR Daily Awards.Instead of cranking out yet another traditional annual report, the team turned to video and an associated infographic to share the ADA’s message. It studied member research to identify ADA achievements that would resonate with the audience.Communicators reached ADA members via multiple channels, including social media. They reached leadership via dental society websites. They also connected with ADA staff via the intranet and other communication channels. Dental society editors were also notified, and the video was screened for audiences at membership conferences and the ADA’s annual meeting. On YouTube, the video earned more views during the first week it was available than the previously most-viewed ADA video had earned in six months. With attention-grabbing music and data smartly presented in fast-moving animations, the video achieves the goals of putting members at the center of the story and making the report easily shareable. Congratulations to the team of Amy Beschta-Newborn, Natalie Matthews, Nicole Cramlett, Adriana Galvan, Jessica Hernandez, Tracy Hollenbach, Steve Horne, Chris Mitchell, Julia Nissim, Shanna Quinn, Drew Reynolds, Lisa Sall, Leslee Williams and Jerry Wohletz. 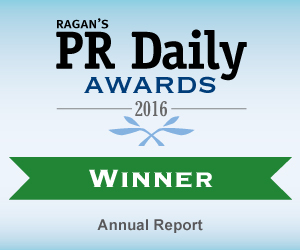