Ten years of legislative breakfasts in Pennsylvania during National Child Abuse Prevention Month, designed to raise money and awareness for the Pennsylvania Family Support Alliance (PFSA), had resulted in no reduction in reports of child abuse. Working with Nell McCormack Abom Communications, PFSA looked to reinvigorate the program that targeted “mandated reporters”—those required under law to report child abuse—along with the general public. Its success has earned first place in the “Cause-Related Marketing” category of Ragan’s 2017 PR Daily Awards.

To achieve these lofty goals, all geared toward raising awareness of child abuse and how people can report it via ChildLine—Pennsylvania’s 24/7 hotline to report maltreatment of children—the agency recruited a local TV station to share its “The More You Know” PSA campaign, and aligned with iHeartMedia (the largest media organization in central Pennsylvania) for help promoting the event at the state capitol.

For the event itself, 4,000 blue ribbon flags were installed in front of the capitol and on light poles on the street leading to the building. Direct marketing was brought to bear, along with paid media, and a viral volunteer event to plant the flags.

The campaign resulted in a significant increase of donations, as well as nearly tripling participation at the annual event. Other results included 559 earned media reports and an increase in social media followers. Most significantly, the number of reports to ChildLine increased as a result of heightened awareness of child abuse and reporting. 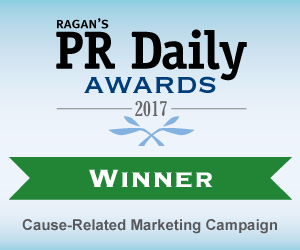