Ensuring audiences know about corporate social responsibility (CSR) efforts is an important consideration in earning a strong reputation and winning the trust of the public. Thus, Aflac was worried to find that, despite an impressive track record of commitment to the community, awareness of its CSR efforts was low. The effort to correct that lack of awareness has won first place in the “Corporate Social Responsibility” category of Ragan’s 2017 PR Daily Awards.

Along with agency partners FleishmanHillard and KWI Inc., Aflac  set out to:

• Raise awareness of the recognition it had received for ethical business conduct
• Elevate its reputation for attracting, retaining and promoting a diverse workforce
• Drive awareness of Aflac’s philanthropic activities
• Communicate the steps the organization had taken to reduce its environmental footprint

Media campaigns, articles bylined by executives in trade and business publications and an annual CSR report were among the activities Aflac undertook to build awareness of its commitment to social good. The organization also hosted events, conducted a satellite tour and executed a variety of other tactics.

The organization saw a 3.7 point increase in its overall RepTrak Pulse score (from the Reputation Institute), which moved it into a “strong” reputation ranking in each of the ranking’s seven categories. Fundraising efforts increased, interviews were published, bylined stories appeared in key media (including PRWeek and the Huffington Post) and Aflac was named to Ethisphere Magazine’s list of the world’s most ethical organizations (its 11th time on the list). 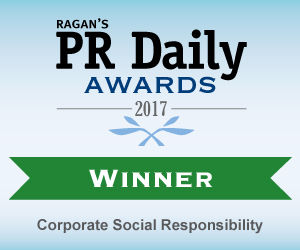