Say you wanted to promote New England’s leading dairy brand. Some might go for a down-to-earth campaign involving cows and rustic yokels in overalls.

But 451 Marketing took to the skies in its campaign for HP Hood, one of the largest dairy retailers in the U.S.

The campaign got sweet-toothed members of the public to use social media to guess the location of photos taken from a blimp. The approach won 451 and HP Hood top honors in the Best Use of Photography category of PR Daily’s 2013 Social Media Awards.

To really push HP Hood, 451 used the Hood Blimp that spent the summer flying over New England, snapping high-quality photos of landmarks. Some of the photos were posted on Facebook and Twitter, but four were part of the “Top of Your Game” contest.

The goal, says 451, was to “use the Hood Blimp’s ability to cover all of New England to push awareness around HP Hood as the New England dairy brand. A cross-platform social media contest was set up to augment traditional PR tactics, local event marketing and media buys.”

A combination of Facebook advertising and PR team outreach spread the word about the contest.

In the contest, a new photo was posted every Monday for four weeks. Fans who correctly named the location were entered to win a $100 gift card, with a grand prize drawing for a $500 gift card and a year’s supply of Hood Ice Cream. 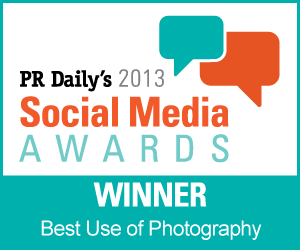