The University of Mississippi (Ole Miss) has long had the reputation of being a top football school, but few people may know the university’s Pinterest page is tops, too. In just one academic year, it grew to be the second most followed university account in the U.S.—with a nonexistent budget.

For substantially growing and engaging its Pinterest audience, the University of Mississippi earned first place for Best Use of Pinterest in PR Daily’s 2013 Social Media Awards. We congratulate contributing staff members Lindsey Abernathy, Ryan Whittington, Meredith Edwards, and Jennifer Farish on this accomplishment.

So, how does a university grow such an engaged following so quickly? Here are a few ways:

1. Create unique (and free) content.
Ole Miss already had many fans on Pinterest. To reach even more, the university had to create unique content that those fans would want to share with others. It created a “Free Ole Miss Stuff” board that featured printables (cupcake toppers, prints to frame, valentines, etc.) that fans could print out and use at tailgates, as home décor, and for other purposes. By the end of the year, Ole Miss fans had downloaded the printables more than 50,000 times.

2. Use in-person events to reach prospective audiences.
What better place to find Ole Miss fans than at a football game? The Pinterest team created special trophies tagged with the URL of the Ole Miss Pinterest page and handed them out to the hosts of the best tailgating setups, hoping to drive them to the page.

3. Team up.
During holidays, Ole Miss partnered with local businesses to create a holiday gift guide board featuring products from the businesses. In return, the businesses put a window cling in their storefront windows advertising the university Pinterest page. The Ole Miss Pinterest team also partnered with the university’s athletic department and the education and pharmacy schools. These departments hosted boards, and then promoted the Pinterest page on their websites, social media sites, and publications. 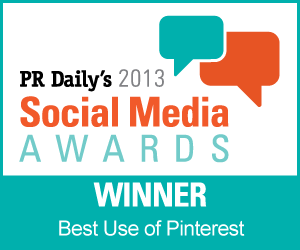