ENMAX Corporation has provided Canadians with electricity for more than 100 years. When floodwaters rose in Calgary this summer, it had a simple message to share with consumers:

We award ENMAX Corporation top honors in the Best Use of Social Media for Crisis Management category of PR Daily’s 2013 Social Media Awards because of how quickly it responded to the crisis to alleviate concerns from customers. The flooding in Alberta caused 26 communities to evacuate and affected more than 110,000 people.

When Calgary declared a state of emergency, ENMAX shut down power to the downtown core and surrounding areas near the river, affecting approximately 34,000 customer sites.

Once the river crested and water receded, it was time for ENMAX to help turn the power back on. In the meantime, it turned to social media to share the latest updates. Consumers had limited access to television and computers, so they used Facebook and Twitter to get the most up-to-date information about the outage.

A team of 11 communicators rotated to provide service 24 hours a day to ensure timely, accurate, and consistent messaging. During the crisis, ENMAX sent out more than 660 tweets and retweets.

Once all the power was restored, it created a “Thank you Calgary” YouTube video about its employee volunteer efforts in the flood cleanup.

Here’s what we liked best: According to the entry, “Before the flood, social media was viewed as an emerging communications channel at ENMAX to share community event information, corporate news and outage information. After the flood, ENMAX leadership took notice of the effective use of social media in a crisis. Since then, a robust social media strategy and program has taken shape and continues to be an overall corporate priority.” 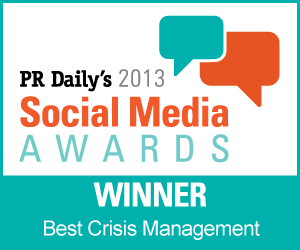