Say you’ve got a serious hair problem. Who could you ask for help? If you had the hair care experts at L’Oreal Paris to turn to, wouldn’t you?

That was the idea behind L’Oreal’s decision to team up with influencer platform SheSpeaks to come up with the hashtags #AskHairGenius and #AdvancedHaircare. Starting in April 2013, the beauty company made its team of experts available to the millions of people on Twitter, most of whom need some hair advice every now and again.

Since then, the program has generated 75,000 pieces of advice, reached more than 10 million people, generated more than 300 million earned media impressions, and built L’Oreal Paris USA’s Twitter mentions by more than three times. The two hashtags from the campaign have been in the United States’ top five trending topics multiple times.

For sidestepping the traditional Twitter offerings of platitudes and contests, L’Oreal and SheSpeaks are the winners of the Best Use of Tags/Hashtags category in PR Daily’s 2013 Social Media Awards. The initiative was spearheaded by three team members at L’Oreal: Allison Lauria, Roxanne Barretto, and Sonali Johri. Two team members at SheSpeaks, Emily Morgan and Carol Milliron, oversaw that part of the program.

From the outset, L’Oreal aimed to do more than create a “one-hit campaign.” It succeeded. 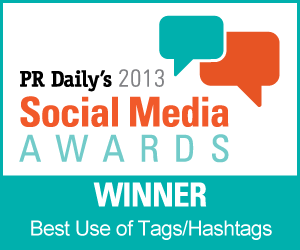