The National Senior Games are an every-other-year athletic competition for people 50 years old and older. Although more than 10,000 people compete in the Games, they are largely unknown among the demographic that would might compete in the Games and consume content about them. Enter Humana, the insurance organization that served as presenting sponsor for the 2015 Games—and winner in the “Multi-Media Campaigns” category of PR Daily’s 2016 Digital PR and Social Media Awards.

Because the National Senior Games Association has limited resources, the event gets little coverage. Working with agency Coyne PR, Humana developed a comprehensive campaign to raise awareness of the Games: The “Game Changers” program honoring 13 athletes in 11 of Humana’s key growth markets.

The Games are held in the Minneapolis area, so the team produced videos of senior athletes running, jumping, volleying and dribbling through Mall of America. Professional photos and B-roll were distributed to media. An on-site video booth at the athlete village enabled competitors to share their stories via social media. The team even broadcast seven events via Periscope, Twitter’s increasingly popular live-streaming app. Native advertising was employed to amplify the content.

The potent mix of content, content types, and activities led to improved performance for the Humana brand across multiple dimensions, along with more than 1,500 media placements—all positive—generating more than 144 million impressions. As for social media, the campaign resulted in (among other things) 650,000 views of the Mall Walkers video. 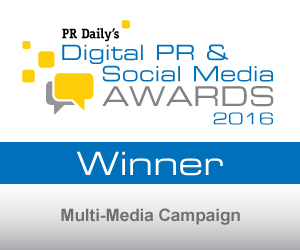