One would expect a strong social media showing from Cisco Live, Cisco’s five-day festival for partners, influencers and tech nuts. What made their campaign surprising and delightful was its relentlessly “attendee aware” nature. Its impact has earned Cisco first place in the “Best Social Media Campaign” category in PR Daily’s 2016 Digital and Social Media Awards.

Cisco built the campaign around the Social Media Hub, a physical bank of monitors and uniformed employees dedicated to handling the social media for the event, including the commitment of responding within three minutes to comments that required attention. When they were not resolving attendee questions, they curated content from the event using Vine, Storify, Instagram videos and Facebook albums. The massive wall of monitors at the hub displayed real-time content, shared social media mentions and stats, and trumpeted the analytics from the event, in true tech-geek form.

The online audience also got to chime in using the #CLUS hashtag, allowing them to enjoy the excitement of the live event and even win a prize for the most engaged virtual attendee.

The campaign included other nifty elements of the human touch, including a feature by which anyone tweeting at the event received a digital autograph from the day’s featured celebrity. They also incorporated social responsibility, donating a dollar per tweet up to $20,000 to the Mike Rowe Works Foundation.

Yes, the social media bank was spectacular, but the techy and digitally inclined audience warranted such spectacle. More importantly, it paid off, resulting in staggeringly increased engagement over the previous year and a resulting ROI that justified the expense—and then some.

Congratulations to Cisco for the Cisco Live campaign! 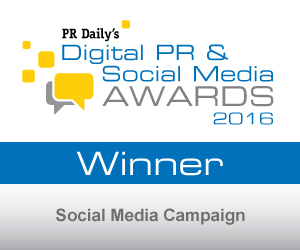