The stakes were high for HP Inc. at the 2016 drupa trade show. Although drupa may not be a household name, it’s the world’s leading trade show for the graphics and industrial printing industry. In 2016 HP was drupa’s largest exhibitor, its space on the trade show floor representing the first time the largest spot was occupied by a digital print vendor. The organization wanted to capitalize on its presence, and with PR agency Porter Novelli it did just that—and took first place in the “Social Media Campaign” category of PR Daily’s 2017 Digital PR & Social Media Awards.

The 11-day drupa event takes place once every four years. HP has historically had a presence at the show, using it to make important announcements. In 2016 HP saw an opportunity to generate excitement in social media as well as inside the convention hall.

Based on intensive research, the team built its content strategy on three pillars: HP as a visionary in the industry, the organization’s product innovation, and customer reinvention. Execution of the strategy began well before the show kicked off and moved into high gear at the trade show, with employee ambassadors sharing positive coverage, daily reports, videos shot at an in-booth studio featuring HP representatives and a broad range of other activities.

HP’s presence at drupa resulted in sales that exceeded goals by 150 percent. Every one of the global top-tier industry publications covered HP’s drupa presence. As for the social media element, the organization owned the trade show’s share of voice on Twitter; HP’s messages reached more than 1.4 million people, its videos were viewed more than 255,000 times and blog posts were viewed more than 5,000 times—all well above HP’s goals. 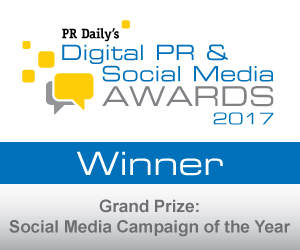