The idea of a “hero” can take a number of forms, many of which don’t necessarily require a customary cape.

As an annual campaign organized by the University of Michigan demonstrates, for those waiting on a transplant that could potentially save their life, that humble hero could be practically anyone willing to help those in need.

That’s the notion behind “Wolverines for Life,” a collaboration between the U-M Health System and other University of Michigan groups, schools, and departments.

Partnered with the American Red Cross, Be the Match, Gift of Life Michigan, and the Michigan Eye-Bank, these groups work together to promote lifesaving donation of organs, tissue, blood, and bone marrow through various school events.

One of its biggest endeavors is the campaign’s Be a Hero at the Big House drive. Held at Michigan Stadium, participants can donate blood, sign up as an organ or tissue donor, and get both screened and registered on the National Marrow Donor Program registry.

Developed during a brainstorming session, the idea for the video was to travel to Camp Michitanki, the school’s summer camp for children who have already received transplants. There, the team talked with children and counselors about their experiences, many of whom are featured in the video talking about their own personal “hero.”

At just over a minute in length, the short video provides a moving message while allowing people to see the smiles and faces of those who have been saved by the generous gift of life.

“All of the people in this new video are with us today because of someone who gave them the gift of life. Signing up on the donor registry, giving blood or being screened for bone marrow donation is a simple thing to do, but it truly can save someone’s life,” says Jeffrey Punch, M.D., director of transplantation at the University of Michigan’s Transplant Center.

Shared on YouTube and through several of the University of Michigan’s social media channels, the video soon caught the eye of Ellen DeGeneres, who, in turn, posted it on her Facebook page.

Ellen’s post helped draw national attention to the event, with the video having since been viewed more than 20,000 times.

More important than shares, however, the campaign helped the University of Michigan sign up 103,286 organ/tissue donors to the state donor registry, collected 2,575 pints of blood, and recorded 300 new registrants to the Be the Match Registry for bone marrow donors.

Knowing that a single organ and tissue donor can save eight lives and help up to 50 people, that one pint of blood can save up to three lives, and that a bone marrow donation offers a second chance at life for the 10,000 patients each year who are in desperate need of a transplant, but are without a donor match, these are the numbers that matter most to the Wolverines for Life campaign.

Hopefully bringing greater attention to the effort and helping to boost those registrant numbers even higher, it’s our privilege to name the University of Michigan’s heroic campaign the winner in PR Daily’s 2013 Video Awards for Best Public Relations Video. 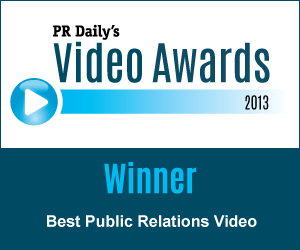