Too many safety campaigns rely on in-your-face reminders to be safe or dry how-to material explaining how to build safety into specific activities. Raytheon took a different tack, and in doing so has won first place in the “Safety Video” category of PR Daily’s 2016 Video Awards.

Raytheon has garnered more than the usual amount of employee attention to its safety videos by telling stories of real employees that drive home the safety message in a personal, compelling way. One 2015 video, for example, featured an employee astronaut’s close call in space. Another told the tale of an employee whose grandfather sustained a serious injury at work.

For 2016, Raytheon’s communicators sought to convey the story of an employee injured away from work to illustrate the importance of safety both in and out of the workplace. They found their subject in environment health and safety engineer Vu Nguyen. A mountain biking accident left Nguyen with metal plates in his skull; he and his loved ones also suffered deep emotional scars.

The video remained one of the most-visited pieces of content on Raytheon’s intranet for a full five weeks.

Congratulations to Sheila Wizst and Jonathan Lord for an emotional video with real impact. 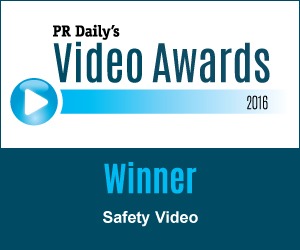