You may already have seen advertising from TravelNevada and agency Fahlgren Mortine that touts Nevada as a travel destination. The theme, “Don’t Fence Me In,” set to the well-known song, has featured prominently in advertising seen widely (in California, anyway). Seeing the potential in virtual reality technology, the organizations decided it was time to produce a 360-degree video. The end result has won first place in the “360 Video” category of PR Daily’s 2017 Video and Visual Awards.

Goals for the video included showcasing the diverse experiences visitors can have in Nevada while immersing viewers in the video. Working with a group of millennials to maintain authenticity and encourage unscripted reactions, the production spanned seven days, 750 miles and 20 people.

The experiences highlighted in the video go beyond the usual Las Vegas and Reno activities, including a road trip and sand-duning.

The video wasn’t simply tossed onto Facebook. Instead, it was shown in pop-ups designed to look like saloons—complete with barstools and Nevada characters—at a variety of California venues, including the Sausalito Art Festival, a music and art festival in San Diego, the Santa Monica Pier, the Los Angeles Famer’s Market and Pier 39.

Californians viewed destinations like Hoover Dam, Valley of Fire State Park, Virginia City and other locations. They responded by saying, “Now I want to go to Nevada,” and “I felt like I was really there!” During the three-week tour, more than 2,400 people watched the video, 1,105 signed up to win a trip and 665 visitors’ guides were taken. 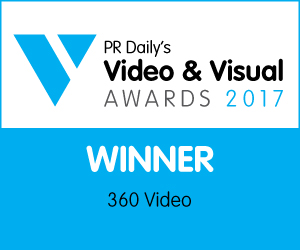