Seventeen-year-old Isaiah Acosta was born without a jaw and with no pathways for oxygen. His condition has also left him without a voice. A music video featuring a rap song Acosta wrote on his smartphone, though, has taken first place in the “Marketing Video” category of PR Daily’s 2017 Video and Visual Awards.

Acosta has been able to communicate through a combination of gestures and the use of his smartphone. Over the years, he developed a passion for writing raps. Children’s Miracle Network Hospitals connected Acosta with popular Phoenix-based rapper Trap House, who was moved to give voice to Acosta’s first rap, “Oxygen to Fly.”

The video features Acosta and Trap House, and highlights lyrics that display Acosta’s courage and determination. Sales of the track benefit the hospitals. The music video is accompanied by a documentary that itself has attracted more than 125,000 views. The video generated media coverage from outlets ranging from local Phoenix news programs to USA Today and People. 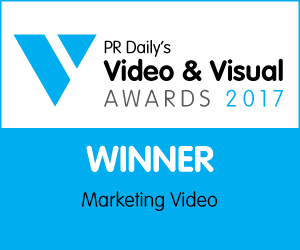