At the Lowe’s annual national sales meeting, more than 3,000 leaders from across the organization gather in Las Vegas to discuss the organization’s strategic direction and prepare to lead their teams through the first half of the year. One video prepared for the meeting has won first place in the “User-Generated Video” category of PR Daily’s 2017 Video and Visual Awards.

The video was shot entirely on iPads by store managers, then stitched together for presentation at the meeting. Store managers were asked to identify employees who inspired them, then record those employees as the manager explains why they’re being recognized. The goal was to show the audience of leaders “what happens when you create a culture that serves our people.”

Store managers were asked to keep diversity in mind, hold the iPad horizontally, get close to the employee so their audio would be clear and avoid standing in front of a window (for lighting purposes). Managers were also provided with a suggested script of what to say.

The resulting video presents a range of emotional reactions from the employees being singled out for their contributions.

Congratulations to the team at Lowe’s for an outstanding user-generated video. 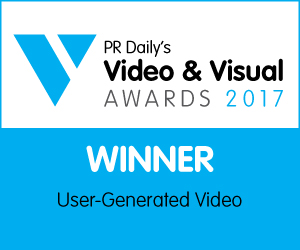