The Tampa Bay Active Life Games features Olympics-like events (a 50-meter dash, swimming and games like horseshoes, darts and bowling) for participants 50+ years old. Offered by the Hillsborough County (Florida) Department of Parks & Recreation, the competition has become a tradition, now approaching its 40th year. For its 37th annual event, the department wanted to do something different with video. Its efforts have earned first place in the “Event Video” category of PR Daily’s 2018 Video & Visual Awards.

The goal was to increase interest in people on the younger end of the age eligibility, those in their 50s and 60s, and to increase awareness of the Games’ new name (it had previously been called the Senior Games). The video strategy was informed by an understanding of the demographic, which had grown up with media touchstones like MTV and Nike’s “Just Do It” campaign. The team also targeted events for which they wanted to see increased participation, identifying past participants to represent the desired audience.

The short (less than a minute) spots were shared on the usual social media channels, as well as Nextdoor; they were also played on Hillsborough County Television. A local art theater also ran the spots during trailers shown at its Summer Movie Classics Series.

The videos achieved a satisfying number of views and even sparked some media coverage. 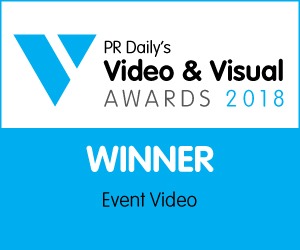