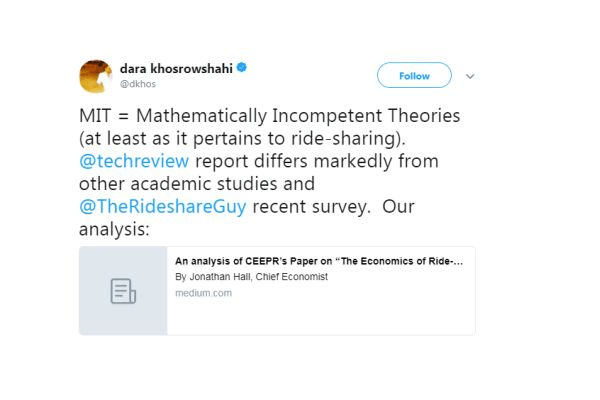 Uber’s new chief executive, Dara Khosrowshahi, has had the tough job of helping to repair the company’s battered reputation.

Though Khosrowshahi’s previous actions have been applauded— including his apology following London’s announcement that it was withdrawing Uber’s operation license—a recent move has brought fresh criticism.

MIT = Mathematically Incompetent Theories (at least as it pertains to ride-sharing). @techreview report differs markedly from other academic studies and @TheRideshareGuy recent survey. Our analysis: https://t.co/S2aAqCuDR0

The tweet references an MIT study which revealed that after subtracting ride costs, the majority of Uber drivers make just $4—far below the minimum wage.

The MIT study used data from a survey of 1,150 drivers published by gig economy blog The RideshareGuy, and found that drivers’ profits, after calculating vehicle and fuel expenses, were awfully low, with 74 percent of them earning less than the minimum wage in the states where they operate.

After MIT published its findings, Uber’s Chief Economist Jonathan Hall took to the company’s Medium blog to challenge the claims. He pointed to two other surveys conducted by Uber, one in partnership with Princeton, and another with Stanford; both reported significantly higher earnings for drivers (in the range of $19-$21 as gross hourly income).

Though it’s not a surprise that Uber swiftly refuted the study, journalists called out the executive’s brash way of handling it.

Describing MIT researchers as “incompetent” is a big swing (and also seems to diverge from Khosrowshahi’s aspirations to a kinder, gentler approach to leading Uber). And Hall’s claims to have found a flaw in the MIT study are, at least as presented, not entirely compelling.

In an Inc article titled, “With a single insulting tweet, Uber’s CEO just destroyed months of hard work,” Justin Bariso wrote that the tweet “threatens to destroy the image

Travis, is that you?

Though the tweet stoked more criticism for Uber, it also moved researchers to take another look at the study.

On Saturday, Reuters reported that MIT would revisit the study, taking into account a survey discrepancy suggested by Uber’s chief economist Jonathan Hall. MIT will release new results along with a public statement on Monday.

Hall’s rebuttal to the study said the likely misinterpretation of a survey question and the study’s”inconsistent logic” produced a wage result that was below similar studies elsewhere. He said the study used a”flawed methodology” compared with a survey that found drivers’ average hour earnings were $15.68.

“The earnings figures suggested in the paper are less than half the hourly earnings numbers reported in the very survey the paper derives its data from,” wrote Hall.

The MIT study’s lead author, Stephen Zoepf, told Reuters in an email on Saturday,”I can see how the question on revenue might have been interpreted differently by respondents” and called Hall’s rebuttal thoughtful.

Thanks @MIT for listening and revisiting this study and its findings. Right thing to do. https://t.co/3PLun2hGil

Though the tweet was composed and polite, Khosrowshahi was still criticized for previously lashing out.

How would you have advised Khosrowshahi to respond to the study, Ragan/PR Daily readers?