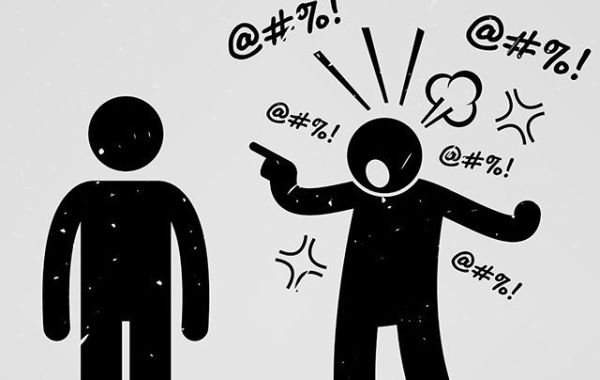 During my first weeks on the job in a brief and non-illustrious stint as a communicator some years ago, I forgot to pull the trigger on a scheduled press release.

An senior executive from our company phoned me from his office down the hall and set my ear ringing with shouted rebukes. Yet when I hung up, all I recalled were the F-bombs—not anything he might have wanted me to do next.

Did I understand that I’d blown it? Oh, you bet. Was the profanity effective? Your call.

That’s the thing about swearing at work—or, less often, in written communications. It might just be counterproductive. For some (especially younger workers) curses are as unremarkable as dropping a “you know” into a sentence. Others find it distracting or off-putting.

Overlapping the two are those who distinguish between cursing at someone, and the overexcited co-worker who slips into profanity when regaling the lunchroom with the time he was hiking in Oregon and came face to face with a f—ing Sasquatch.

So is cursing a good idea at work, or not?

Employers’ policies and guidelines often mandate that colleagues speak to one another respectfully, says Jessica Golden Cortes, and attorney with the New York firm of Davis & Gilbert LLP.

In certain states such as California, employers of a certain size must train managers in anti-abusive workplace conduct, she says. This includes instructing managers not to swear at their subordinates because it might be perceived as “abusive” and could contribute to a perceived hostile work environment.

“While it would not likely be practical to forbid swearing in the workplace altogether, or to try to enforce that on a daily basis,” Golden Cortes says, “certainly employees should be encouraged to speak to one another respectfully at all times, and to do their best not to swear, and certainly not to direct expletives at other colleagues.”

Two sides to every blue streak

Whatever your stance on workplace cursing, you’ll find arguments to bolster your case. Citing a study by CareerBuilder.com, a Forbes piece titled “Is Swearing Appropriate At Your Work?” stated that 81 percent of employers surveyed believe swearing at work “brings an employee’s professionalism into question.”

If, on the other hand, you enjoy spouting off like Tony Soprano, a host of articles offer their support. A Chicago Tribune columnist insists that “swearing at work is just fine.” The Atlantic wants you to know that “profanity can help you seem more likable.” (The publication perhaps undercuts its thesis by drawing examples from the least likeable class of homo sapiens on earth: politicians.)

A Bloomberg story reports, “It’s normal for millennials to say ‘s—’ and ‘f—’ at work, and new research finds that younger women are among the most likely demographic to drop the f-bomb in the office.”

The proliferation of in-office cursing is a manifestation of a greater cultural change. Broadcast television, once careful to stick to G-rated language, has expanded its lexicon of epithets. Literary publications that once blanched at vulgarisms now dump them like tapioca pearls into bubble tea.

It was already quaint in 1984 when an archivist at a New Yorker-like magazine in Jay McInerney’s novel “Bright Lights, Big City” complained about “a certain so-called film critic … [who] has trashy taste, not to mention a filthy mouth.” The archivist pulls out a bound copy and shows the protagonist precisely when a certain four-letter word first appeared: There! In 1976! Yet a search of The New Yorker archives this week revealed “about 1,800 results” for the F-bomb, most notoriously when it was used it five times in one sentence.

The Tribune column cites a study that found that “profanity was associated with less lying and deception at the individual level, and with higher integrity at the society level.” Count me skeptical, but it’s amusing to read this in a publication where the writer must resort to cartoon grawlixes (“%$&# you”) to make his argument.

Few organizations drop curses into their outward-facing communications, although one occasionally runs across consultants who salt their blog posts with potty-mouthed prose. Red Bull surely is responding to its demographic when it balances 11 F-words with 11 s–ts in a brand journalism piece called, “2 Sketchy Days With Mac DeMarco.”

Forbes urges a broader view, stating that rather than listing inappropriate words, “we’re more interested in the message people are sending at work. Do your words inspire greater engagement, commitment, and performance? Or do they suck the energy out of the people around you—curse words or not?”

Still another way to look at swearwords is that they are headlice on the language, like the “ums” and “you knows” that are so difficult to groom from our conversations. If you get in the habit of saying them, they are nearly impossible to get rid of.

And if words risk offending people and add zero meaning, perhaps it’s worth combing them out.