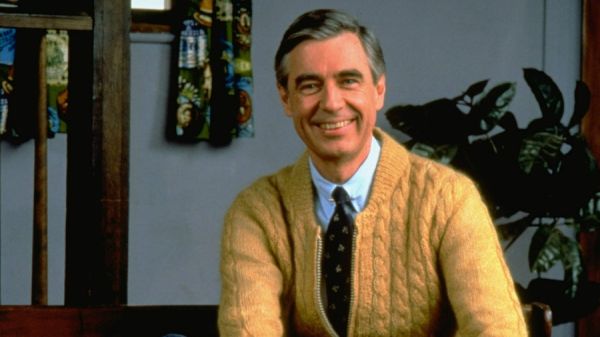 This year marks the golden anniversary of the premiere of “Mister Rogers’ Neighborhood.”

The world has changed dramatically since 1968, but the precepts and principles presented in the beloved show—which ran on PBS until 2001—still resonate. Fred Rogers’ gentle, authentic brand of educational storytelling was aimed at kids, but the wisdom he shared applies to larger people, too.

Michael Keaton, who got his start as a crew member on “Mister Rogers’ Neighborhood” long before becoming Beetlejuice and Batman, said Rogers was “one of the nicest, authentically good people you’ve ever met.” Rogers was also an exceptional communicator and an exemplary leader. By all accounts, he created a culture behind the scenes that mirrored the show’s salubrious, uplifting content.

“When I was a boy and I would see scary things in the news, my mother would say to me, ‘Look for the helpers. You will always find people who are helping.'”—Fred Rogers

It’s easy to focus on the terrible things happening around us. People who look for bad news can always find it. Instead of harping on rude colleagues, unfair policies, seemingly unsmashable silos, glory hogs, presentation-dumping execs, sandwich stealers, vengeful IT staff or uncommunicative managers, find the helpers.

Actively seek out those compassionate, encouraging, hardworking, selfless colleagues who uplift co-workers. Enlist internal helpers who can create change, then equip and empower them to do so. Encourage them to keep going through recognition, rewards and consistent praise.

No matter how bad your culture seems, the helpers are there—somewhere. Seek them out, and give them the tools they need to become positive internal ambassadors and influencers.

2. Find the best in people.

“It’s you I like.”—Fred Rogers

How do you create a healthy culture when you’re surrounded by deeply flawed human beings? It starts with a mindset that persistently, patiently finds the best in people. That’s how you find common ground, build trust and create genuine camaraderie.

Of course, workplaces are often chock-full of people who are rude or just plain difficult to deal with. Some might even have an emotional “disability.” As Rogers wrote in his book:

Part of the problem with the word “disabilities” is that it immediately suggests an inability to see or hear or walk or do other things that many of us take for granted. But what of people who can’t feel? Or talk about their feelings? Or manage their feelings in constructive ways? What of people who aren’t able to form close and strong relationships? And people who cannot find fulfillment in their lives, or those who have lost hope, who live in disappointment and bitterness and find in life no joy, no love? These, it seems to me, are the real disabilities.

Regardless of your colleagues’ likability, or lack thereof, try your best to see their best. Freely share praise, credit and gratitude to inspire more of the same. Work to create a culture that publicly recognizes selfless striving, collaboration and exceptional teamwork.

Kind words tend to repel wrath. Instead of responding to passive-aggressive emails with more snark, err on the side of compassion.

Before unleashing fury, consider: How would Fred Rogers respond?

Whenever you’re having a down day, put this on autoplay:

3. Find the heart of authentic truth.

“One of the greatest gifts you can give anybody is the gift of your honest self. I also believe that kids can spot a phony a mile away.” —Fred Rogers

Mr. Rogers didn’t skirt hard issues. He respected his audience enough to be transparent and honest—even about “adult” topics such as assassination, divorce or disabilities.

To build a healthier culture, fight hard to make sure employees are abreast of what’s happening—even when times are rough. Workers crave honesty, feedback and updates.

As Rogers told NPR: “Every one of us longs to be in touch with honesty. … I think we’re really attracted to people who will share some of their real self with us.”

Strive to be one of those people who’s “in touch with honesty.” Fight for more genuine expressions of truth, emotion and authenticity in your organization. You’ll be well on your way to creating a healthier, more empathetic corporate neighborhood.