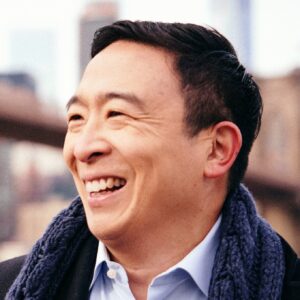 Andrew Yang is a former 2020 Democratic Party presidential primary candidate, 2021 New York City Democratic mayoral primary candidate and founder of the Forward Party. In October, 2021, he left the Democratic Party to become an independent, faulting what he characterized as a system stuck in increased polarization and saying he is more “comfortable trying to fix the system than being a part of it.” In 2012, he was named a “Champion of Change” by the Obama administration and an Ambassador for Global Entrepreneurship. In 2011, he founded Venture for America, a nonprofit fellowship program intended to find and train entrepreneurs.