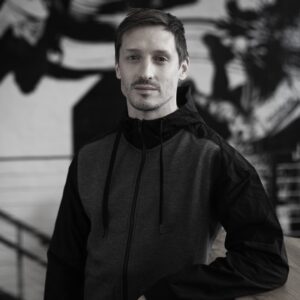 Prior to this, he served as vice president of communications at Tinder, the biggest dating app on the planet.

Dan was head of global communications for Activision Blizzard’s esports division – building the narratives and shaping public perception to become the world’s most innovative, scalable, and valuable developer of global competitive entertainment.

Dan also built and led Reebok’s global “newsroom,” where he fused the powers of public relations, digital content, social and paid media to translate business priorities into cultural currency that contemporized the brand – manifesting in everything from hosting a wedding on the floor of the CrossFit Games, to making Shaq and Victoria Beckham a fashion power couple, to directly challenging the President of the United States in social media.

He served as storytelling manager at Ford Motor Company, working across business units and geographies to craft stories that positioned Ford as a world-class brand. He helped the Blue Oval march toward its most aggressive product launch calendar in its more than 110 years of business, supporting the global launch of 2015 Mustang and Mustang’s historic 50th anniversary.

He also led media strategy for Nintendo during some of the company’s most fabled years, including the award-winning launches of the record- and paradigm-shattering Wii.