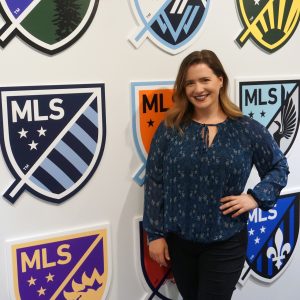 Melissa Marchionna is the director of social media at Major League Soccer. A strategic young executive with a more than 10-year track record of leadership and innovation stretching across all areas of social media and content strategy, her mission is to ensure women can prevail in an inclusive and progressive sports industry. Marchionna is responsible for spearheading the overall direction for the league’s social media department, which she successfully developed into one of the top in professional sports. Her growth strategy, combined with launching new partnerships with both Facebook (2017) and Twitter (2018) for live-streaming regular season games on the platforms, resulted in MLS growing its social media followers by 963 percent since 2013, the highest growth rate among U.S. professional sports leagues.Marchionna and her team of more than five full-time editors were recognized by Sports Business Journal as “Best in Social Media” in 2018 and by the Shorty Awards in 2017 for “Best Instagram Stories.” Prior to MLS, Marchionna spent a year with the New York Jets, where she spearheaded creation of programmatic social media content. Before that, she was part of the Pittsburgh Penguins’ award-winning new media team for three years, where she oversaw the team’s digital media strategy.