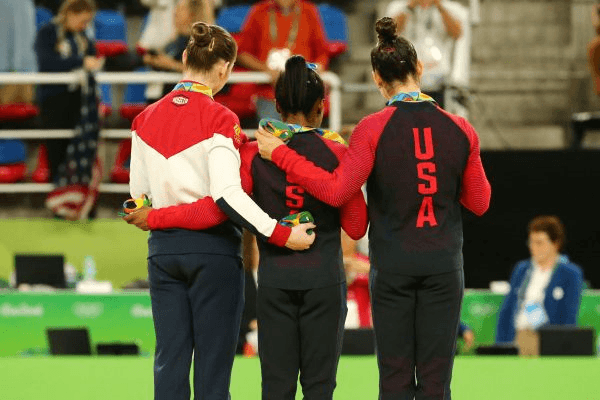 Nassar’s downfall started in March 2016 , when IndyStar published its “Out of Balance” series, investigating USA Gymnastics’ broken policies for handling sexual abuse. IndyStar continued to cover the case, alongside other reporters from the USA Today Network, including the Lansing State Journal, which is where the trial took place.

… IndyStar’s reporting continued, all the way through the sentencing hearing, in which more than 150 women shared their experiences of abuse. Nassar assaulted the athletes he treated while working for both USA Gymnastics and Michigan State University.

USA Gymnastics initially told IndyStar it contacted the FBI “immediately” after learning of athlete concerns about Nassar’s treatment, but later acknowledged it waited five weeks while conducting its own investigation. Texas law requires “any person suspecting that a child has been abused or neglected must immediately make a report.”

As the crisis grew and Nassar’s sentencing drew near, USA Gymnastics distanced itself from several leaders—but cries for the organization to take further action continued.

On Jan. 18, USA Gymnastics cut ties with Karolyi Ranch, where many of the alleged assaults by Nassar occurred. On Jan. 22, three board members resigned, and the coach of 2012’s U.S. Olympic gymnastics team was suspended.

On Jan. 26, the board announced its remaining members will resign by Jan. 31 in response to an order by the U.S. Olympic Committee.

Informing USA Gymnastics of the required resignations, USOC CEO Scott Blackmun cited the “shocking and tragic stories surrounding Larry Nassar’s years-long abuse of vulnerable athletes.” In the letter he sent to the gymnastics organization, he added, “We must take further action to ensure that it cannot happen again.”

The crisis has caused several sponsors to withdraw from the organization, as well.

The same day that former USA Gymnastics team doctor Larry Nassar was sentenced to up to 175 years in prison for years of sexual abuse against current and former Team USA members, AT&T announced it had cut ties with the troubled organization. The Texas-based telecommunications giant became the fifth major corporation to sever its business connections to USA Gymnastics. According to ESPN, Under Armor had previously decided to end its partnership with the organization early, whereas Hershey, Kellog, and Procter & Gamble decided not to renew their respective deals.

In a statement, the Dallas-based telecom giant said it is “suspending our sponsorship of the organization until it is re-built and we know that the athletes are in a safe environment.”

… “The terrible abuse suffered by these young women is unconscionable,” AT&T said in a statement. “We remain committed to helping these young athletes pursue their dreams and hope to find other ways to do so. We stand ready to step back in when USAG has fully addressed these tragic events.”

Losing corporate partners is a significant blow to the organization. Sponsorships and marketing accounted for about a quarter of USA Gymnastics’ $23.7 million of recorded revenue in 2015, according to the Orange County Register.

Many of the gymnasts who were abused by Nassar are also suing USA Gymnastics, accusing the organization of not doing enough to prevent the assaults, or of allowing them to continue. Earlier this week, the federation’s chairman Paul Parilla, vice chairman Jay Binder and treasurer Bitsy Kelley announced they were stepping down. John Geddert, the coach of the 2012 U.S. Olympic team who’d hired Nassar at his Michigan gym, was suspended.

And the Indianapolis-based nonprofit — once a cash-rich darling of the Olympic movement — is now squeezed between a self-inflicted public relations nightmare and a host of lawsuits that could cripple it for years.

The problem, experts say, is USA Gymnastics officials need to be transparent if they hope to regain the public’s trust, while the lawsuits prohibit them from saying anything that would amount to an admission of guilt.

“Often in a crisis communications situation you will have the public relations folks in conflict with the general counsel or the attorneys,” said Michael Wyland, partner in Sumption & Wyland, and consulting editor of Nonprofit Quarterly. “Both are looking at the best interest of the corporation, but they see the best interest of the organization in very different ways.”

USA Today said USA Gymnastics has “a long, tough road at best” ahead of it.

Crain’s Detroit Business reported that MSU also had a “long, complex road ahead” as it tries to regain trust after Nassar’s sentencing.

In the aftermath of the Nassar criminal verdict and sentencing, the university is working to reduce huge liabilities from civil court lawsuits and scrapping with insurers, which may be on the hook for hundreds of millions of dollars, as the wounds of losing in the court of public opinion mount.

It won’t be simple, or cheap. It may be years before it’s all resolved. And anything MSU does to reduce its ultimate costs — vigorously fighting victims’ claims in court, for example — risks a backlash that could further hammer its reputation.

University leaders’ communications up to this point have not helped stemmed the tide of criticism that continues to grow.

Among those notified was MSU President Lou Anna Simon, who was informed in 2014 that a Title IX complaint and a police report had been filed against an unnamed physician, she told The News on Wednesday.

“I was informed that a sports medicine doctor was under investigation,” said Simon, who made the brief comments after appearing in court Wednesday to observe a sentencing hearing for Nassar. “I told people to play it straight up, and I did not receive a copy of the report. That’s the truth.”

Simon told reporters she fired Nassar “the day she knew about [the allegations]”:

On Jan. 24, Simon resigned—publishing a letter on MSU’s website which read, in part:

The last year and a half has been very difficult for the victims of Larry Nassar, for the university community, and for me personally. To the survivors, I can never say enough that I am so sorry that a trusted, renowned physician was really such an evil, evil person who inflicted such harm under the guise of medical treatment. I know that we all share the same resolve to do whatever it takes to avert such tragedies here and elsewhere.

… As tragedies are politicized, blame is inevitable. As president, it is only natural that I am the focus of this anger. I understand, and that is why I have limited my personal statements. Throughout my career, I have worked very hard to put Team MSU first. Throughout my career, I have consistently and persistently spoken and worked on behalf of Team MSU. I have tried to make it not about me. I urge those who have supported my work to understand that I cannot make it about me now. Therefore, I am tendering my resignation as president according to the terms of my employment agreement.

Anyone who knows me knows I am a principled person. I have spent my entire professional career, more than 40 years, at MSU. I love this place. I have watched it grow and prosper, and it has been the honor and privilege of my life to serve as its president since 2005, and over the last few years, to have the opportunity to work with all of you toward our shared goals for MSU. I will continue to do whatever I can to help MSU prosper in the future as a Spartan in whatever role I may play.

The letter brought further criticism upon Simon and leaders of the university.

Resignation letters that are intended for public view are typically last gasps of leadership. They are often the first step in helping an organization close one chapter and move into another. They are typically written succinctly, following the adage that “less is more.” But Simon chose arrogance over humility, defensiveness over compassion and callousness over sensitivity, in a lengthy recitation.

Here we are, a day after the letter was posted, still reading about it — still thinking about it — rather than the university’s plans for the future. That proves Simon’s resignation letter did not achieve what should have been its objective.

How would you advise leaders at USA Olympics and Michigan State University to handle this crisis and try to win back its audiences’ broken trust?