May Institute’s core mission is to raise awareness about autism. To do this, the communications team created a multifaceted autism awareness campaign timed to coincide with Autism Awareness Month in April 2012.

For PR Daily’s 2013 Nonprofit PR Awards, we award May Institute top honors in the Best Advocacy Campaign or Lobbying Effort category because of how it humanized autism, stayed within a low budget, and only had three months to execute all parts of the campaign.

A main focus of the campaign was its partnership with Massachusetts Bay Transportation Authority. This is where the majority of MBTA platform posters were located, along with subway “car cards” that gave information about autism. By partnering with MBTA, information about autism reached 1.3 million commuters every day. The team also pitched media stories, wrote articles and press releases, and updated its website. May Institute’s website received a record-breaking 17,000 visitors during April, according to the entry.

May Institute obtained $120,000 worth of ad space and printing services for $18,000—the total cost of its campaign.

“The fact that we created and managed all aspects of the campaign in-house except the printing helped us keep our expenses extremely low,” according to the entry. 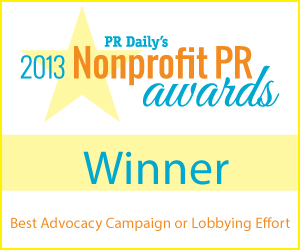