This one tells about waves of human dramas, one upon another, played out on a global stage and altering the course of history. It features indelible photographs that supplement and surpass the storytelling capacity of even the abundant facts and figures therein.

Welcome to the Human Rights Watch Annual Report, “A Year of Change: The Arab Spring 2011,” our winner for Best External Publication or Report in PR Daily’s 2013 Nonprofit PR Awards.

It casts a glaring spotlight on Egypt, Libya, and Syria, recounting what transpired—the atrocities and the successes—as well as what lies ahead for each. The writing is concise and potent. The photographs range from the exultant to the abhorrent. Numbers tell their own story; faces tell theirs.

Its coverage doesn’t stop with that regional focus, though. Reporting includes updates from Mexico, Papua New Guinea, the Balkans, and the United States, as well as the struggle for the rights of women and girls worldwide.

The report was published in English, French, German, Japanese, and Arabic, reflecting the organization’s global scope and audience.

The latter part of the report deals with financials, but even that element isn’t dryly conveyed. The Global Challenge section specifies major initiatives and a snapshot of fundraising efforts toward those ends. The lengthy lists of contributors’ names are broken up with quotations about the organization’s works.

Finally, the How We Work page explains in straightforward language the organization’s modus operandi.

Congratulations to Michael Burlingame and the Human Rights Watch communications team for an exceptional achievement. 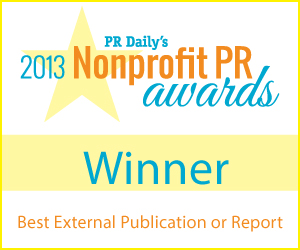