One relief nonprofit got creative with its PR when a hurricane left its staff working from their kitchen tables across the Eastern Seaboard with intermittent electricity, limited email access, and dying cellphone batteries.

Another relief organization found a way to get llamas and goats into TV news studios—therefore boosting the idea of giving Christmas gifts of animals to the poor abroad.

Both the Jewish Federations of North America and World Vision found ways to creatively promote their causes in unusual ways, making them the winners of the Best Media Relations Campaign category in PR Daily’s 2013 Nonprofit PR Awards.

Amid the turmoil of a superstorm, the Jewish Federations secured widespread coverage of the Hurricane Sandy Relief Fund. Staffers got the word out about where to donate and pitched stories about on-the-ground relief efforts to mainstream and Jewish media, scoring coverage on CNN.com, NBC News, Forbes, Bloomberg, BuzzFeed, and the Chronicle of Philanthropy.

World Vision promoted its annual gift catalog as a way of avoiding the usual holiday greed-fest by encouraging families to buy goats, cows, chickens, and other gifts for needy people abroad.

World Vision trained representatives and provided live animals to appear in TV shoots and studio pieces, offering amusing images of bewildered goats penned in flashy TV studios. All this increased media placements in 2012 by 62 percent over the previous year, with more than 1,406 hits. And it boosted fundraising in seven of the top 10 media markets, among them New York, Los Angeles, Chicago, Dallas, and Seattle.

For grace under pressure—and for understanding the concrete needs of the image-hungry media—these two groups tie for first place in our Best Media Relations Campaign category. 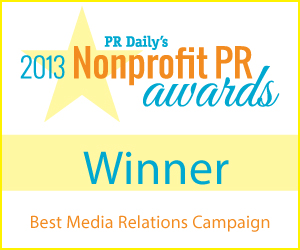