Each September, Share Our Strength’s “No Kid Hungry month” makes a big noise about the 16 million children who suffer from hunger in the United States. The campaign kicks off with the fundraising initiative Dine Out for No Kid Hungry—an effort that last year drew hundreds of thousands of consumers into 9,000 participating restaurants and raised more than $10 million.

To achieve these unprecedented results, the campaign skillfully employed social media to ignite excitement and drive diners into restaurants, instituting a one-day TwEAT OUT for No Kid Hungry. The group used the Thunderclap crowdspeaking platform so that tweets could make maximum impact; at noon on the day of the TwEAT OUT, more than 2.4 million were reached.

Prior to the TwEAT OUT, Share Our Strength had partnered with the Food Network to recruit 30 cable television networks to “Go Orange” on Sept. 8. That day, the networks aired a No Kid Hungry public service announcement that promoted the #GoOrange and #NoKidHungry hashtags and turned their own Web and social platforms orange. Thousands of individual avatars turned orange as well. That afternoon, several big names with huge followings, such as television chef and food writer Andrew Zimmern, tweeted about No Kid Hungry and helped the campaign become a trending topic. By the end of the day, #NoKidHungry had reached more than 19 million people, and traffic to the group’s website had nearly doubled from the previous year.

Share Our Strength’s No Kid Hungry campaign wins top honors in the Best Advocacy/Awareness Campaign category of PR Daily’s 2014 Nonprofit PR Awards because it not only creatively raised awareness and much-needed funds to end childhood hunger, but also built community, both online and off, bringing real people together around the table to make a difference. 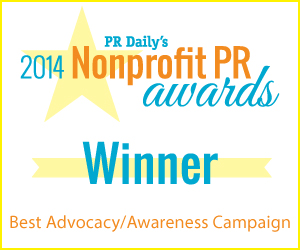