On September 10, 2018 at the International Manufacturing Technology Show (IMTS), one of the world’s largest manufacturing conferences, HP Inc. set out to revolutionize metal manufacturing with the launch of HP Metal Jet, the world’s most advanced 3D printing technology for high-volume manufacturing of production-grade metal parts.

The company’s objective was to grow its influence as a leader in the global digital transformation of manufacturing. For both its success in launching the groundbreaking new Metal Jet technology and its impact on the manufacturing sector as a whole, HP has won the “PR Campaign of the Year” award in Ragan’s 2018 PR Daily Awards.

As a new player in the metals marketplace, HP knew the industry faced challenges, like the perception that 3D printing at an industrial level was still slow, expensive and lacked broad applications. During the launch, HP’s goal was to position Metal Jet as the most advanced printing technology for industrial scale mass production with key partners like Volkswagen, the largest auto group in the world, and GKN, which produces billions of metal parts per year for the automotive and industrial sectors, showcasing real applications from the start.

To set the stage for the launch, HP tested the technology with third-party research. The American Society for Testing and Materials and the International Organization for Standardization both indicated that the product exceeded industry standards. The communications team built strong relationships with leading manufacturing innovators. HP, GKN, Parmatech, Volkswagen, and others implemented a deeply collaborative communications model, and Volkswagen even issued its own announcement about its planned integration of Metal Jet as part of a multiyear road map to transform the way it designs and manufactures.

Launch communication began months in advance in collaboration with HP’s strategic partners and customers and kicked off with a deep set of preliminary interviews; more than 65 reporters participated in an embargoed online interactive presentation, top press influencers attended strategic events (including a main-stage keynote and VIP press conference) and toolkits were distributed to HP managing directors and international Communications teams worldwide to support amplification of the launch. A deeply collaborative social media strategy was also executed with HP’s launch partners to amplify the overall launch reach.

The effort resulted in an 80% share of voice at IMTS; 250 articles in business, innovation, trade, vertical and broadcast media; and 560 million impressions on Twitter. The company’s shares rose 1% on the news on Sept. 10. 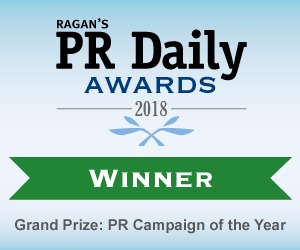