In the wake of the horrific mass shooting at Marjory Stoneman Douglas High School in Parkland, Florida, a group called Teens for Gun Reform organized a protest in front of the White House. The shooting occurred on February 14; the protest would occur on February 18 (President’s Day), led by two high school students who had the foresight to contact Steppingstone LLC, a D.C.-based PR and graphic design practice. Their combined efforts have won first place in the “Publicity Stunt” category of Ragan’s 2018 PR Daily Awards.

The protest would be a stunt: 17 protesters representing the 17 high-schoolers killed in the shooting would lie down for three minutes, representing the amount of time it took for the gunman to purchase his weapon. The protest goal was simple: a call to action to break the nation’s gridlock over gun law reform.

With just 30 hours before the “lie-in,” Steppingstone issued a press advisory and started pitching the event to D.C. news desks and reporters. The teen organizers used social media to attract students, benefiting from the fact that the protest was planned on a federal holiday, when schools were closed and media outlets were hungry for something to cover.

Advance stories appeared as a result of the outreach, generating even more interest and leading Steppingstone to realize the protest would attract more media than initially anticipated; additional PR resources were arranged for the day of the event.

On the morning of the protest, Steppingstone made another round of early desk calls; nearly every national and local TV news desk indicated they planned to attend and report on the event.

Camera crews set up in a horseshoe-shaped arc around the White House fence line, capturing the protest and resulting in significant top-tier coverage, including the front pages of The New York Times and other daily newspapers, along with NBC’s “Today” show, ABC’s “Good Morning America” and CNN’s “Anderson Cooper.”

For their effort to spread the word of the protest, congratulations to Ami Neiberger-Miller and Samantha Villegas. 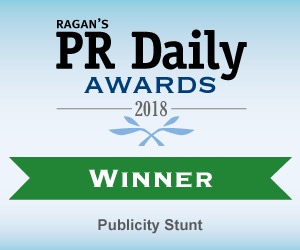